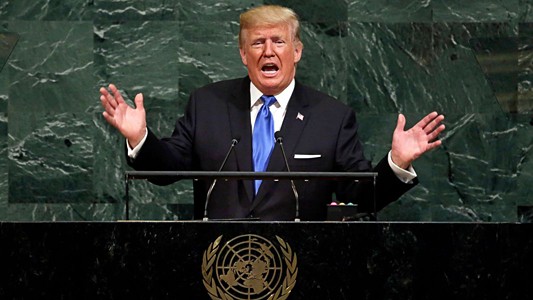 The U.S. Peace Movement Should Not and Cannot Afford to Remain Silent

We let President Trump’s own words at the United Nations speak for themselves. His speech at the UN General Assembly on September 19, 2017 was the height of dishonesty, hypocrisy, imperialist grand standing, and total contempt for the UN Charter and international law. It also signified the U.S. administration’s intention to revive the old Cold War.

Trump spoke of the “nuclear threat” of North Korea, calling that country’s leader the “Rocket Man,” without mentioning that U.S. and allied forces are at the same time carrying out military exercises on North Korean borders which are aimed at potential invasion of that country. Nor did he mention the fact that the U.S. has installed first-strike anti-missiles near North Korean borders and maintains over 23,000 troops in South Korea.

Trump spoke of the “nuclear threat” of Iran at the time when Iran, while surrounded on all sides by the nuclear-armed U.S. forces, has signed an agreement with the United States and five other states to refrain from developing nuclear weapons.

Trump spoke of the “criminal regime of Bashar al-Assad” at the time when tens of thousands of criminal terrorists, armed and funded by the United States and its allies, are wreaking havoc on the Syrian people while being protected by the illegal U.S. ground and air forces in Syria.

Trump spoke of the “destabilizing regime of Cuba” without mentioning the fact that the U.S. government and the CIA have been persistently trying to destabilize the Cuban revolution and its government, assassinate its leader, illegally occupy its territory in Guantanamo, and continue U.S. blockade of Cuba in violation of repeated resolutions of the same UN General Assembly he was speaking to.

Trump spoke of “taking action” against the “socialist dictatorship” of President Maduro if “Venezuela persists on its path.” (In the past, he had also stated that he was “not going to rule out a military option” against Venezuela.) But he hid the fact that it was the United States that acted illegally against democracy in Venezuela when it staged a coup against its then democratically elected president Hugo Chavez, and is still doing so by trying to bring down the current democratically elected president, Nicolas Maduro.

It is clear from Trump’s words that the “path” that worries him most, not only in Venezuela but in Cuba as well, is the path of free health care, free education, and free public services for all people; a path that Trump is trying to block and reverse within his own country.

Unfortunately, all of the corporate media’s attention, and most of the peace movement’s objections, about President Trump’s speech have so far been only focused on his threats against North Korea and the obvious need for de-escalation of tensions. But as important and urgent as this is, it involves missing the forest for the tree.

Looking at the whole speech, it becomes quite clear that the situation is far more dangerous than it appears. We are now dealing with a qualitative shift in the official U.S. foreign policy — ironically announced at the headquarters of the United Nations — away from the principles of the UN Charter and international law and toward a unilateral declaration of war and intervention by the United States on any country that stands in the way of its ambition for global domination.

Trump’s “America First” policy, as announced by him at the United Nations, is going to be the core of U.S. government’s foreign policy from now on. This means a total rearrangement of international relations in a manner that only serves the United States and its strategic and economic interests. Obviously, such an imperialist policy, as outlined by Trump in his speech at the United Nations, cannot be advanced without violating the principles of the UN Charter and international law.

The U.S. peace movement bears a special responsibility to prevent such a catastrophic outcome. But no proclamation or public statement can by itself prevent the catastrophe. What is urgently needed is a unified anti-war, anti-interventionist front composed of all segments of the peace movement that is capable of mobilizing an effective mass movement against imperialism and war.

U.S. Peace Council calls upon all peace organizations in the United States to lead local, regional and national demonstrations, and visits to members of Congress, including sit-ins, and demand from the U.S. government to:

The U.S. Peace Council is ready to join hands with all peace forces to organize the broadest possible mass protests against the extremely belligerent and imperialist U.S. foreign policy as announced by Donald Trump at the United Nations.