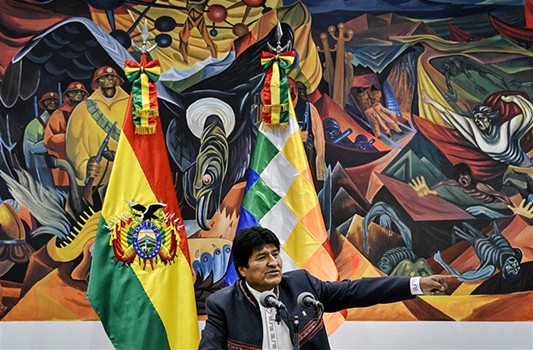 The U.S. Peace Council (USPC) strongly condemns the U.S.-backed military coup against the democratically elected president of Bolivia, Evo Morales, and stands in solidarity with Bolivia’s first indigenous president and the people of Bolivia. The violence unleashed by the military and members of the right-wing opposition forced the resignation of Evo Morales and his vice-president in the hope of putting an end to the foreign-induced violence and destruction in their country.

This is a coup against a president who has lifted three million Bolivians out of poverty (42% drop in the poverty rate and 60% drop in the extreme poverty rate). He had also dared to close U.S. military bases in Bolivia and had paid to combat fires in the Amazon, actions which have undoubtedly angered the U.S. ruling circles.

This action in Bolivia is in keeping with U.S. efforts to destabilize democratically elected governments in Central and South America — Cuba, Venezuela, Nicaragua, and now Bolivia — and brutalizing and suppressing people’s movements in countries like Colombia. The orchestrated protests and violent acts of reactionary forces in the city of La Paz; the threats and attacks on politicians, the media and social movements; and the threats against embassies of Venezuela, Cuba and Mexico in La Paz, are further evidence for the true intentions of the U.S.-backed coup plotters. Since 2001, the USAID has been financing the right-wing opposition to Evo Morales and the U.S. Government has been working closely with them.

It is clear that the U.S. government is deeply concerned with the rise of the left and independent popular movements and governments in Latin America. It has been using every weapon in its arsenal — sabotages, political subversion, imposing trade blockades and killer economic sanctions, expanding the NATO presence in Latin America, and establishing new military bases — to stem the tide. The coup attempt in Bolivia is just the last imperialistic attempt in this direction.

The U.S. Peace Council vehemently opposes the U.S. imperialism’s efforts to re-establish its hegemonic domination of the Latin America. We call for an end to NATO presence and closure of all U.S. military bases in Latin America, an end to the unilaterally imposed sanctions on Cuba, Venezuela and Nicaragua, U.S. commitment to the Colombian Peace Accords and an end to U.S. regime change efforts in Latin America and throughout the world.

We call upon all peace-loving people of the United States to condemn these imperialist acts of the U.S. Government and mobilize mass protests against the coup in Bolivia and all other U.S. efforts to undermine the national sovereignty of the peoples of Latin America and the world.

A Manufactured Crisis in Ukraine is Victimizing the World’s Peoples

CALL TO ACTION: STOP THE WAR WITH RUSSIA OVER UKRAINE!