No military cooperation with those who planned the twin crime of 1974!

The announcement of the US Embassy in Cyprus, which states the intention of the US to offer military education and training to the Republic of Cyprus, represents a huge provocation against the Cypriot people. It also stressed that this cooperation acts as an effective means of defending US national security!

Is the breaking off of Cyprus’ relations with Russia in the interest of the Cypriot people, as this bill demands?

Is it in the interest of Cyprus and our people to tie themselves to the US-NATO war machine and to get involved in imperialist interventions in the Eastern Mediterranean and the Middle East?

Is the implementation of the Menendez-Rubio bill perhaps an attempt to wash away the US-NATO criminal role in the twin crime committed in 1974?

They are offering the same generous “education” and “training” today as they offered in 1974 to their then collaborators, the junta of Greece, EOKA B and the Turkish army, to execute the coup d’état and subsequent invasion of 1974.

The Cyprus Peace Council (CPC) has a clear position. If the US and the Anastasiades government intend to upgrade their relations and military cooperation, we have no intention whatsoever of accepting cooperation with those who planned the double crime committed in Cyprus at the NATO headquarters in 1974. No soldier and National Guard official has any place in any education and training to defend U.S. national security. The U.S. military and other foreign powers have no place in Cyprus. Neither has Cyprus any position in NATO, nor has NATO any position in Cyprus! The CPC has repeatedly warned that the Anastasiades government is leading us away from the sought goal of the demilitarization Cyprus. Unfortunately, instead of protecting Cyprus, which has suffered so much and is on the verge of partition, the government is turning Cyprus into an unsinkable aircraft carrier of the imperialist powers and an aggressive launching pad

What Cyprus and our people need right now is not the strengthening of military cooperation with foreign powers, but the immediate resumption of the negotiation procedure and the resolution of the Cyprus problem on the basis of a Bizonal, Bicommunal Federation. The role of the National Guard must be to defend the interests of our homeland and our people and not of any other foreign forces and military organizations. The CPC condemns the US-Cyprus military cooperation and declares once again that we will not accept any compromise with the occupation and partition. We will continue to struggle against the militarization of Cyprus, for liberation from the occupation and for the reunification of our homeland, turning Cyprus into a bridge of peace for the peoples.

Secretariat of the Cyprus Peace Council 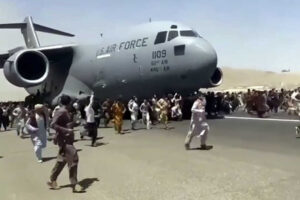 Statement of the WPC about the recent developments in Afghanistan