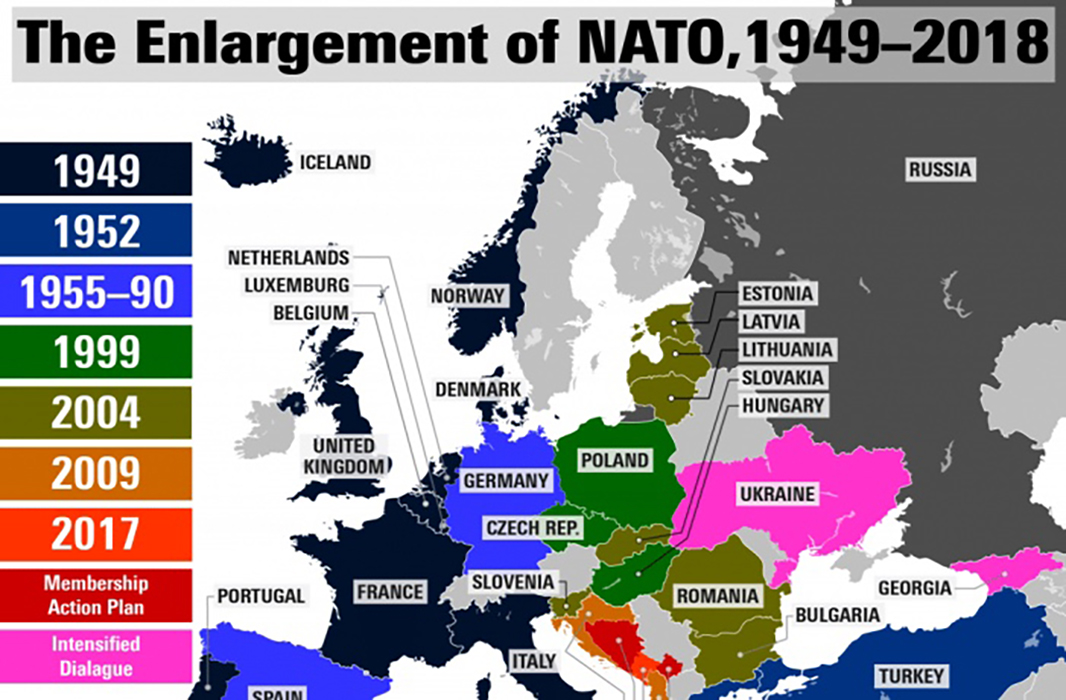 For weeks, the U.S. corporate media have been shrill in declaring that Russia, having positioned tens of thousands of Russian troops on the border, may be about to invade Ukraine. U.S. State Department spokesmen have been threatening Russia with punishing economic sanctions if there were an invasion. Daily, if not hourly, TV viewers are shown satellite images supposedly showing Russian troop concentrations on the Ukraine border, accompanied by unflattering photos of a scowling Vladimir Putin, depicted as the evil source of the new U.S.-Russia tensions.

The cold war with Russia, festering since 2014 and the U.S.-backed coup in Ukraine, may be potentially even more menacing than the new cold war with China. If the armed standoff between the Ukrainian military and the Russian-supported separatist forces in eastern Ukraine, becomes — by miscalculation or design — a conventional war between Russia and NATO, it could escalate into nuclear war.

This is the second Ukraine crisis in a year. In March, the U.S. announced $125 million in military aid to Ukraine, including armed coastal patrol boats and radar equipment, with another $150 million package in June. This included radar, communications, and electronic warfare equipment for the Ukrainian Air Force. This latest package appears to include deploying U.S. training personnel to Ukrainian air bases. According to published reports, Turkey, another NATO state, is supplying Ukraine with the same drones it provided to Azerbaijan for its war with Armenia over the disputed territory of Nagorno-Karabakh in 2020.

In April 2021, the anti-Russian government of Ukraine threatened an offensive against breakaway Russian-speaking eastern regions of Donetsk and Luhansk, and Russia assembled thousands of troops along Ukraine’s eastern border. Since April 2021, NATO has been building up military pressure on Russia in the region.

Summer 2021 saw 30,000 troops take part in Operation Defender Europe 2021, a mammoth set of U.S.-led military exercises from the Baltic to the Black Sea, while last month the U.S. staged simulation bombing raids within 12 miles of Russian airspace. According to NATO itself, its warplanes confronted Russian aircraft 290 times in 2021, most of the time along Russia’s western borders. It means nearly 80 percent of NATO’s 370 flight missions this year involved confrontations with the Russian air force.

On Dec 7, 2021, Undersecretary of State for Political Affairs Victoria Nuland testified to the Senate Foreign Relations Committee that the U.S. government has given $2.4 billion to Ukraine since 2014 “in security assistance,” which included $450 million that was given in 2021 alone. She reportedly tried to reassure Moscow that the U.S. and NATO were still committed to the 2014-2015 Minsk Accords, which included a ban on offensive military operations and a promise of greater autonomy for Donetsk and Luhansk within Ukraine. But her assurances were undone by Defense Secretary Lloyd Austin when he met with Ukraine’s President Zelensky in Kiev in October, reiterating U.S. support for Ukraine’s future membership in NATO, promising further military support and blaming Russia for “perpetuating the war in Eastern Ukraine.”

In his year-end press conference on December 23rd, Mr. Putin stressed that “Further movement of NATO eastward is unacceptable. They are on the threshold of our house. Is it an excessive demand — no more attack weapons systems near our home? Is there something unusual about this?” One need not be an unqualified admirer of the politics of Vladimir Putin to acknowledge that the Russian leader has legitimate security concerns.

In mid-December, Russia took a diplomatic initiative and presented a list of security proposals to the United States. According to the Wall Street Journal:

The proposals handed to the U.S. and published by Russia’s Foreign Ministry include a promise for each side to refrain from carrying out activities affecting each other’s security, preventing the North Atlantic Treaty Organization’s expansion further eastward to include Ukraine, and abandoning any NATO military activities in all of Eastern Europe, Transcaucasia and Central Asia.

“It is fundamentally important for us that the guarantees of Russian security are put on paper and [are] as legally binding as possible,” Russian Deputy Foreign Minister Sergei Ryabkov told reporters Friday. “There is no other option, since a characteristic feature of the current stage of relations between Russia and the collective West is a complete lack of trust.”

The proposals also call for no deployment of additional NATO troops and weapons outside the countries in which they were stationed before any Eastern bloc nations joined the alliance in May 1997, unless both sides agree. Each side should refrain from deploying intermediate and shorter-range missiles where they can hit the territory of the other side, and not use the territory of another state to carry out an armed attack against the other. Among Russian proposals were also an agreement for both sides to regularly exchange information about military exercises and refrain from conducting military exercises and other actions with more than a brigade in the agreed border zone.

The new Russian proposals are a realistic basis for beginning negotiations. So are the Minsk II Accords (2015) agreed to by France, Germany, Russia and Ukraine and endorsed unanimously by the UN Security Council, including the United States. The Accords provided for demilitarization of eastern Ukraine, restoration of Ukrainian sovereignty over the eastern regions, and full autonomy for the Donbas region. Despite occasional lip service, they have been largely ignored by the U.S. and NATO.

It is welcome that the U.S. has agreed to talks in Geneva on January 10, 2022 on the new Russian proposals for legally binding security guarantees. It is also welcome that on December 30, 2021 President Biden had another phone conversation with President Putin. But the U.S. has already rejected several of the Russian security demands, including one that both countries commit to not stationing nuclear weapons outside of their own territory. And there are signs that the Russian side is already skeptical of U.S. good faith. Russian Foreign Minister Sergei Lavrov has stated, “It is important that our proposals aren’t wound up in endless discussions, which the West is famous for.”

Despite these diplomatic efforts, powerful institutional and economic forces in the U.S. — the military industrial complex, Lockheed-Martin, Boeing, Raytheon Technologies, General Dynamics, Northrop Grumman, and others — are eager for a new cold war with Russia, which would provide them with boundless opportunities for profitable arms contracts. “The U.S. military-industrial complex needs enemies like human lungs need oxygen. When there are no enemies, they must be invented,” an astute writer observed recently.

The demonization of Vladimir Putin and Russia by the U.S. media is an integral part of this policy of inventing imaginary enemies, as it has been done to a long list of foreign leaders and nations whose attempts to pursue an independent foreign policy, defying the dictates of Washington, have brought down on their heads the wrath of the Empire. Sadly, given the silence of all but a few peace organizations, it is hard to avoid the conclusion that such demonization has had an effect not only on the U.S. public attitudes, but also on at least a section of the U.S. peace movement, leading to an unwillingness by some to risk appearing pro-Putin. But the real question here is not that of being pro- or anti-Putin; it is a question of addressing the real causes of the escalating conflict with Russia: U.S./NATO expansion and cold war provocations.

The U.S. Peace Movement Must Act Before it is Too Late

To counter those permanent powerful forces will take counter-pressure. The U.S. peace movement should reject demonization of Russian leaders. We must vehemently demand that:

The world is faced with an emergency situation. With the U.S. insisting on expanding NATO to the Russian borders, the danger of a military confrontation is escalating each passing day. Given the fact that the U.S. and Russia are by far the two states with the most nuclear weapons, a conventional war between NATO and Russia could easily escalate into nuclear war. As the outbreak of the First World War demonstrated, leaders may not intend to go to war but can stumble into a situation where they are unable to turn back.

The U.S. peace movement should act together to put maximum pressure on the Biden Administration to change its dangerous belligerent policy against Russia. We must act urgently to push for immediate de-escalation of this NATO-created crisis before it is too late.