For the Defence of our Sovereignty, Independence, and Self-Determination

The Committee of International Solidarity and Struggle for Peace (COSI), member of the Executive Committee of the World Peace Council, expresses its firmest rejection and condemns the interventionist pronouncements of the self-entitled “Group of Lima”, who in a servile manner and subordinated to the interests of American imperialism, have undertaken a series of actions that deepen the escalation of aggressions against our country.

The recent statements by the Group of Lima are violations of the most elementary principles of international law, and its main objective is no more than to create the subjective conditions to justify any interventionist action that threatens peace and stability both in Venezuela and Latin America.

Latin America is a region with significant resources, energy, minerals, water, and biodiversity, in particular Venezuela, and has the largest proven reserves of oil in the world, whose situation is the main reason why imperialism attacks with greater aggressiveness, opening the door to possible scenarios of confrontation in the military field, which endanger peace of the region.

Dangerous statements by the Group of Lima, of the US State Department and of the Organization of American States, regarding the Venezuela border situation under the so-called “immigration crisis” opens the doors for the promotion of conflict with Guyana, Colombia and Brazil, who serve on a silver platter the resources of the countries to European and American monopolies.

Similarly, we denounce the systematic aggressions against Venezuela, that fail to recognise in a blatant way our right to self-determination, independence and sovereignty. We also denunce the attempt to not recognize the presidential election of the past May 20, 2018, when compatriot Nicolas Maduro was elected, as an expression of the desire to generate situations of internal violence, broken institutions and confusion in the ranks of the people’s movement.

North American and European imperialism have,  in recent years,  launched a series  of  coercive  unilateral measures that have strengthened the criminal economic, financial and commercial blockade against our country, which, added to the deep crisis of the capitalist system have increased the precariousness of the material conditions of life of the people of Venezuela.

The popular, progressive, democratic forces and those which struggle for peace will continue defending the legitimate right of our people to defend the achievements reached during the last 20 years of the Bolivarian process, as well as build a project which is not subordinate to the interests of imperialism, or capital, and that is favorable to the interests of the working people.

Only popular unity, international solidarity and the resistance of our people guarantee preventing imperialism and their efforts to defeat the process in Venezuela, and thereby deal a blow to the collective imagination of the peoples of the world that resist imperialism in the same way.

Against this current scenario of harsh national and international confrontation, we call on all forces defending peace, who fight against imperialism, colonialism, war and fascism, to remain mobilized and firm in solidarity with our people, in defense of the constitutional right granted to President Nicolas Maduro for the swearing in of the new presidential term on January 10. 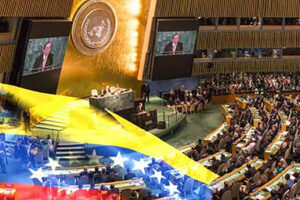 Unfounded U.N. Report on Venezuela Being Used as an Instrument of Regime Change